In the first half of this year, Luxshare Precision began producing Apple's AirPods wireless headphones.

Apple CEO Tim Cook recently embarked on a trip to China where, after attending the Fourth World Internet Conference in Wuzhen, he toured Apple's supply chain and eco-chain partners.

In an interview with The Paper on December 4, Mr. Cook said he had been extremely impressed with Luxshare's staff. Luxshare is a great company, and what makes it great is its passionate and motivated team. Mr. Cook said that, personally, he very much approved of Luxshare Chairwoman Grace Wang’s idea on employee welfare. He also said that Apple's requirement for manufacturers is quality first. "Our company's focus is on creating the best product, not the largest quantity. We underestimated market demand for AirPods."

There have been supply shortages of AirPods since they went on sale, with consumers having to wait for an average of 5-6 weeks to receive the Airpods after ordering them. Waiting times have recently been cut to 1-3 days, however. This is due to the constant refinement of the production process and continuous improvements in yield.

Mr. Cook visited Luxshare's AirPods production line, which has more than a hundred workstations. Because several hundred components have to be fitted into the tiny earbuds, workers look like they're doing embroidery as they carefully insert each component.

Apple dispatched engineers to provide guidance when Luxshare began producing AirPods, with the two sides working together to find way to allow the smooth production of AirPods.

Mr. Cook said that Apple has set up four R&D centers in China, of which the one in Beijing has already gone into operation. These R&D centers need to work with partners, including telecom operators, to iron out any issues with products. 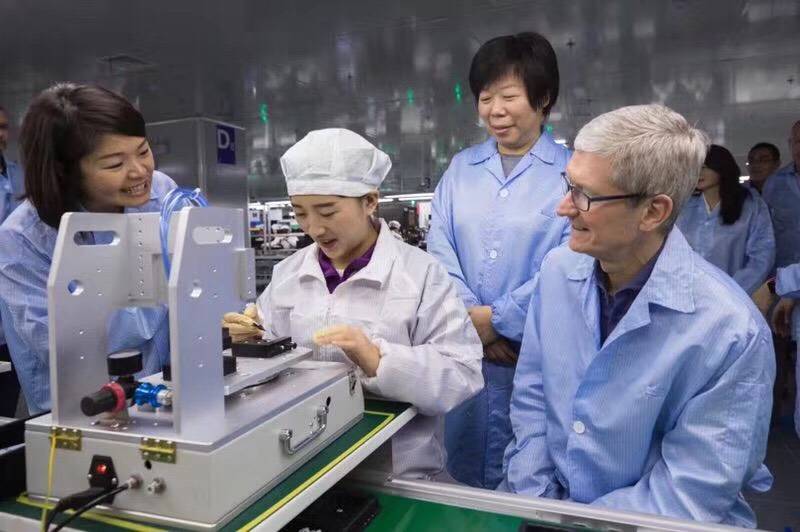 "Birds of a feather flock together"

For Apple, the AirPods involve the most complex production process so far. Each small earbud must be fitted with hundreds of components.

The vast majority of Apple's supply chain is in China, and Luxshare is highly typical of these suppliers.

"I'm a big believer in the saying that 'birds of a feather flock together'." During an interview with The Paper, Luxshare Chairwoman Grace Wang said that production of AirPods was highly complex, and Apple had sent many engineers to provide guidance during the early stages. "Everyone worked really hard."

It is understood that Luxshare has several thousand R & D engineers, of which 800-1000 are involved in automation. According to reports, Apple's product orders account for 78% to 80% of the total prodiction capacity of Lushare's Kunshan plant.

Grace Wang was one of the first mainland employees of Foxconn, another supplier of Apple, and went on to found Luxshare. having worked on the front lines, she knew the various Apple products like the back of her hand.

She can immediately tell if the charger for various Macbooks is a magnet or Type-C.

"It has been eight years since Apple became our client. Right from the beginning, we saw the potential of a production line for internal connectors. So we got to work, and after being accepted as an 'observed supplier', ultimately went on to become one of Apple's main suppliers. Apple’s requirements are extremely strict, and it has given us excellent advice on new product development, mass production planning, and employee welfare," said Wang Laichun. She said that during the years that Luxshare Precision has worked with Apple, it has grown, too.

Apple's supply chain will not shift to lower cost areas

Mr. Cook said that Apple currently has no plans to shift the electronics industry chain to India, Southeast Asia and other low-cost regions.

Grace Wang has also said that high-tech product development and manufacturing cannot only focus on short-term labor costs. This is short-sighted behavior; talent is the key to business growth. Luxshare will carefully maintain its human resources and constantly optimize its manufacturing level, choosing investments that are beneficial to growth.